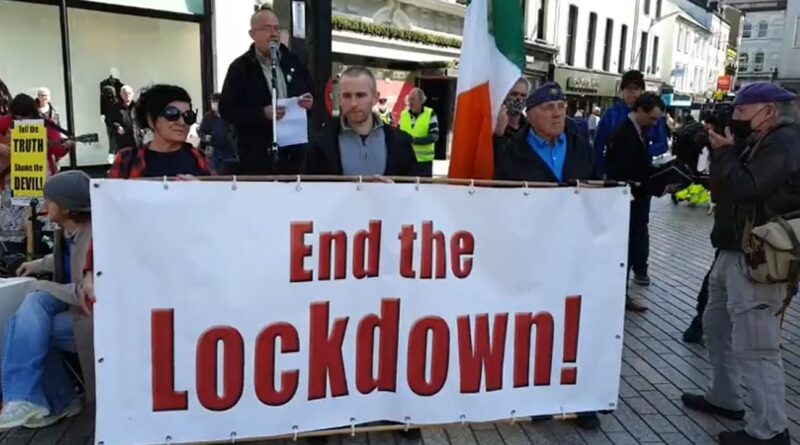 It is nearly a year since a grassroots movement started hitting the streets of Ireland.

It started in Cork, affectionately known as the rebel county, during the 5k restrictions on movement, when people started pushing back against what they perceived as tyranny and new rebels were activated.

The growing discontent with the overreaching dictates led to the formation of a new activist movement, calling for the end to the lockdown that was causing more harm than good, as well as highlighting the unjustified government/media fear-mongering.

Independently, individuals started to put their heads above the parapet to say enough is enough and stand up to fight for their human rights.

New connections started to be formed fuelled by the government’s bulldozing of our fundamental rights, and new freedom fighters started to speak out about the corruption they saw coming from the top down.

People started to make homemade signs and gather on bridges and squares to express their frustrations at being forced to behave like they were sick when they were not.

What started with a few people standing in high-trafficked local areas, eventually became The Monday Marchers and showed that an alternative viewpoint could be expressed peacefully and democratically, with unity providing strength.

Ireland was still in a state of lockdown at this time, March 2021, with intrusive Garda checkpoints stopping anyone attempting to travel more than 5k from their homes. 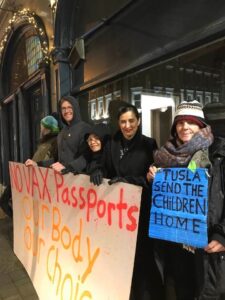 Peter O Donoghue, from Fermoy, was feeling something was amiss and attempted to go to the Dublin protest around St Patrick’s day 2021. However, he was stopped by a checkpoint just outside of Fermoy.

Peter recalls: “Because I was blocked from going to Dublin, I decided to make a quick sign about ending the lockdown and go back to the checkpoint and protest there, but it had gone. Now that I had the sign and the notion of protesting, and because they told me I had to stay within my 5k, I decided to start protesting locally in Fermoy.

“I knew I’d be on my own the first day, but then momentum would build. I knew other people in my locality thought the same way. Next time, one or two others joined me, then another 5 or 6 joined until we built up to about 30 people at the peak in the summer.”

“I thought that I’ll start here in Fermoy and it will catch in other towns, and then tens of thousands would start joining us. But when they ended the 5k rule, a lot of people drifted away and gave up as they couldn’t see the bigger picture. Our consistent number throughout this winter is about 7 to 8 regulars.”

Even though the numbers weren’t scaling up as Peter had hoped, the movement did catch on nationally. “Paddy Bullman started doing it in Youghal,” he added, “Then Christophe in Midleton, and others followed. I remember ringing the local paper and the Corkman paper to come and do an interview with me. Link to article.

Through technology and word of mouth, Peter started to connect with similar groups and Diarmaid Ó Cadhla, a former Cork councillor, who had started a protest every Monday on the main bridge into Cork city. 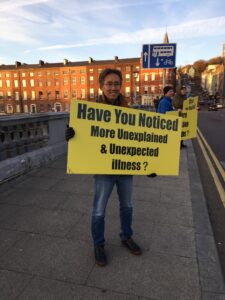 Their goals were aligned: in support of freedom and against the emergency powers criminalizing anyone trying to live their lives. The Monday Marchers brought different tribes together and it soon became a regular weekly event in towns and cities across Ireland, usually on Mondays around 4 pm. 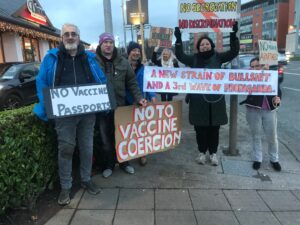 The first joining of the clans happened in early April 2021, when they all came together for a ‘peaceful protest’ marching through Cork city and culminating in speeches. 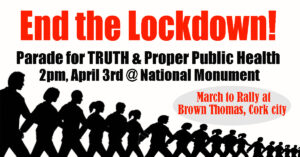 “A friend who is Garda sent me a message saying they’re meant to be dangerous people, stay away, for the first one,” said Peter. “I remember sitting there thinking I could lose a lot, job, reputation, family, friends, but it was also important for the big picture, so I rang Diarmaid and said I would stand up and say a few words about what I was trying to say in Fermoy.

“On the day, everyone gathered together outside Brown Thomas with a helicopter hovering overhead. I felt that if we didn’t stand up then, we would lose everything. Despite the restrictions, I didn’t get arrested, thank god.” 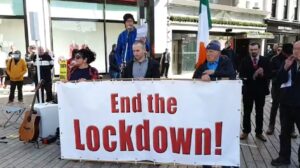 Diarmaid Ó Cadhla, wasn’t so lucky. He was arrested for putting up a banner on Patrick’s bridge in early April 2021, but this only backfired by serving to fire him up further to protest against what he saw as a police state. The court case resulting from that arrest is still being kicked down the road by the courts until they can save face by dismissing it entirely.

Diarmaid said: “I was guided to protest because someone had to make sense of what was happening. Protests had taken place elsewhere but were attached to various interest groups, displaying particular politics, much of which was divisive.”

The first public event was the Rally for TRUTH on March 6, 2021, which was organised by The People’s Convention, the publisher of The People’s Paper, with Diarmaid, a long-time advocate of “people’s politics regardless of ideology, social class, creed or any other division” standing up as the official spokesperson for the event. 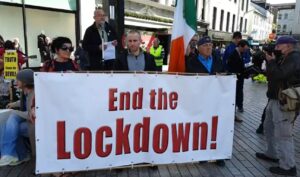 “At that rally, we called for setting up an independent campaign, so what we have now as the Independent Campaign for TRUTH & Proper Healthcare grew directly from that,” added Diarmaid. “It was organised in the middle of what looked like martial law at the time. Mounted riot squads, helicopters, drones, Gardaí and armed detectives were everywhere, the entire city and every town in county Cork was locked down. People were taken off trains in Tralee and in Kildare to prevent them getting to Cork and I’d already had multiple Garda visits to my home, and had several people threaten me physically.”

Today, the groups inspired by the draconian lockdown are spread all over Cork, with offshoots in Blackpool, Ballincollig, Macroom, Midleton, Youghal, with his core group now standing at Bishop Lucey Park and St Patrick’s bridge from 3 pm to 5 pm every Monday. Their motto is stand up and others will come, “Join in with one of the regular events,” says the Monday Marchers’ Facebook page. “Or start a new one, on whatever day or time suites you. Taking a stand only requires one person with a placard, tell us and we will advise others in your area to join you.” 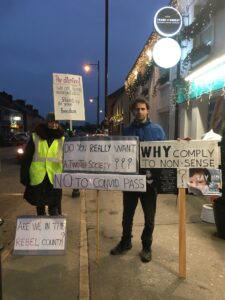 Christophe Celle, who lives in Midleton, said: “In late March 2021 I started to stand once a week in the street in Midleton with my placards, making sure that my message on the Covid narrative was very clear and visible to passers-by and cars. I wanted to show that it’s possible to speak out even if you are just on your own. Over the months I was joined by a few people, in particular Iwona and Melissa, the latter being even present on her own in Midleton while I was joining other groups. The reaction has only been lukewarm in Midleton, but in the end, you never know how much of a change you might have contributed to!” 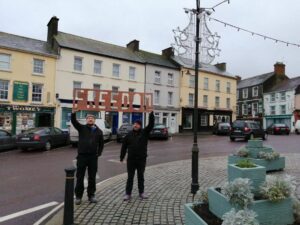 Meanwhile, in Clonmel, Kt M’Grá was similarly taking a stand on Mondays, and spreading wider to areas of Tipperary, with the intention: “Standing with our truth and freedom signs. It’s humanity vs evil folks and we’ll need each other going forward.” 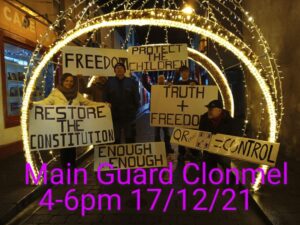 In Waterford, Ayse Leflef posted: “We’ve decided to meet up every Sunday instead as no one was free on Mondays. We’re working on building a community together. All welcome.”

Fast-forward to 2022, and there are now 34 locations where concerned citizens protest most weeks, keeping the pressure on the government to drop the emergency powers and masks.

The Campaign for Truth has also been involved in nationwide pickets on media offices and hospitality venues discriminating against loyal customers, in addition to regular marches and speeches around the country. 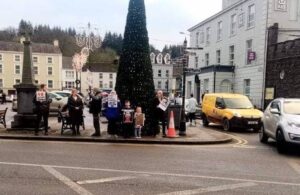 “Most people are coming around now as the narrative is collapsing,” continues Peter. “We get lots of beeps, salutes and people saying well done. I feel it’s important to always stay true to yourself and to speak out when something is not right, and not to give in to pressure.”

“Everything has a ripple effect, maybe in the summer attendances will take off again.” 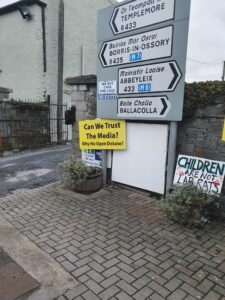 Tenets of the Campaign for Truth 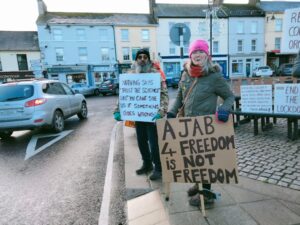 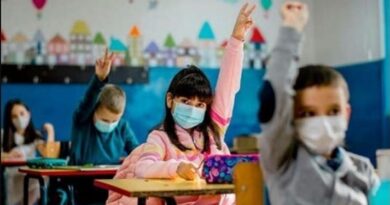 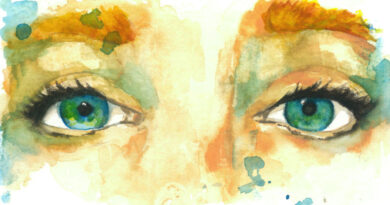 The boy with a racing heart 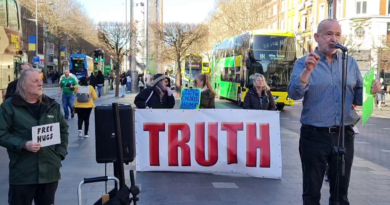 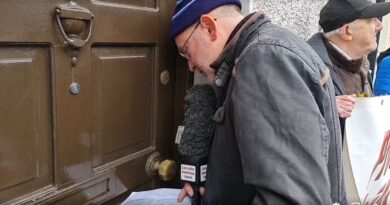 Write to your TD: Just vote No! 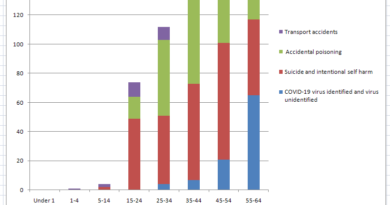 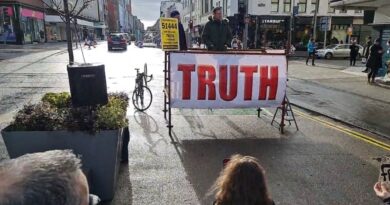 We defend the principles of liberty, equality, and fraternity – Limerick, Saturday 12 February

Stop the Treaty Interview – why we must resist this WHO powergrab

The boy with a racing heart

We defend the principles of liberty, equality, and fraternity – Limerick, Saturday 12 February

The Fake Opposition has Betrayed the People

for Economic Justice & to End the Rip-Off!